Everest commonly known as Sagarmatha/Chomolungma is believed as the holy mother by the locals. Sagarmatha was coined by His majesty during the 1960s, meaning the “Goddess of the sky”.The Goddess of the sky attracts many worshippers, some of them highly experienced mountaineers. There are two main climbing routes, one approaching the summit from the southeast in Nepal (known as the "standard route") and the other from the north in Tibet. But it was never easy to do the job. Tenzing Norgay and Edmund Hillary were the first to make the official ascent of Everest in 1953 finally after numerous unsuccessful attempts by numerous others before them. Since then, many enthusiasts have attempted to please and worship the holy mother through their patience and persistence, many of whom offered their life during their expedition and remains hidden in the mountain until discovered by others. 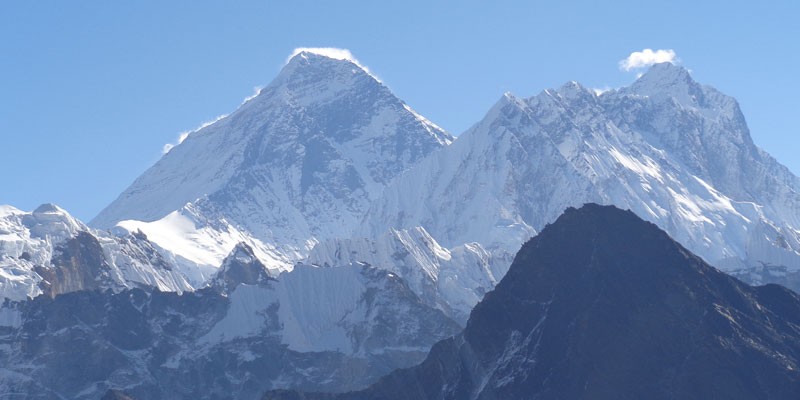 Getting to behold this overwhelmingly magnificent Goddess of the sky, Mt. Everest from very near is a dream come true. Extensive mountaineering high into Everest is a dangerous yet marvelous adventurous expedition that requires passionate meditation and a strong mindset. Yet, we can always choose to take this opportunity to experience the holiness of the mountain through an exclusive trek to the camp of this very Sagarmatha.

Yes, we can have this exotic experience of the world’s roof within 10-15 days of strenuous yet mind-blowingly fulfilling trek to the base camp of the very own Mt. Everest. There are two base camps on Mount Everest, on opposite sides of the mountains: South Base Camp is in Nepal at an altitude of 5,380 meters, while North Base Camp is in Tibet at 5,150 meters. 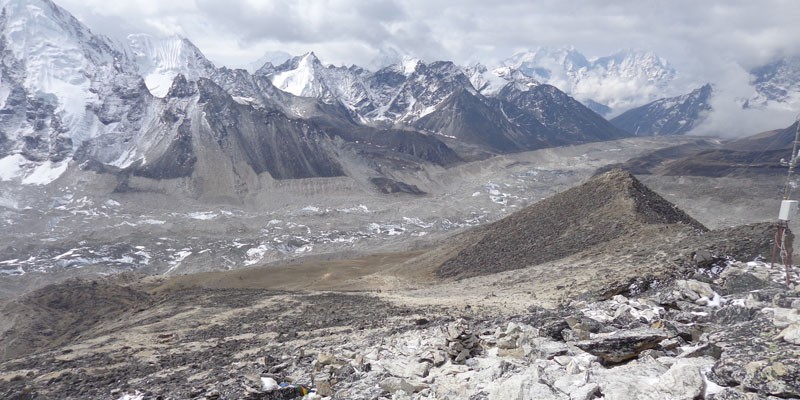 Everest is more than a mountain and the journey to its base camp is more than just a trek. The beauty of the base camp is just as compelling as the magnificence of Mt. Everest itself, while the journey up there is as adventurous and as challenging as the ascent itself. Along a route dubbed by some as "the steps to heaven," every bend in the trail provides another photo opportunity, beautiful forests, Sherpa villages, glacial moraines, and foothills. Imagine you're surrounded by the world's highest peaks around you and everything seems so pure and heavenly. Experiencing this part of the ascent through the base camp trek creates a real story of its own. Once you taste the cold breeze of Everest base camp, you'll remain nostalgic about it your entire life. The Everest Base Camp trek on the south side, at an altitude of 17,900 feet, which is why one of the most popular trekking routes in the Himalayas and about 40,000 people per year make the trek there. 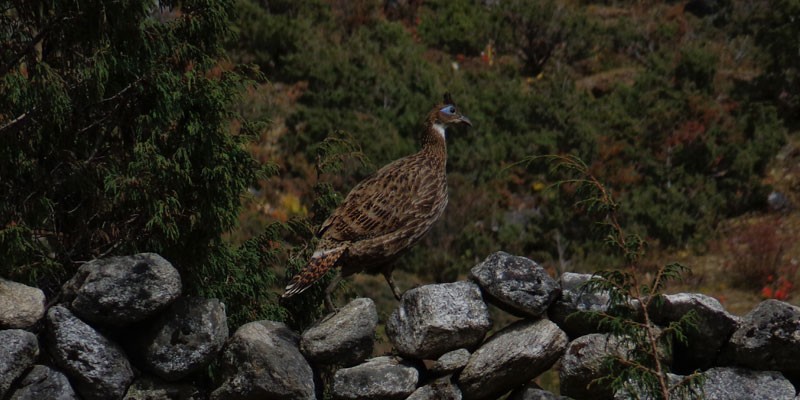 Treat yourselves to the most heavenly and epic experience of trekking all the way from the one and only Everest. Allow us this opportunity of honoring you with the sense of grandeur that comes with trekking through an area considered a Mecca for climbing and mountain enthusiasts. Our lifetime experience of the jaw-dropping sceneries and the unique cultural blend of the Sherpas and the Himalayan tribes starts with the most beautiful decision of exploring the Himalayas through Everest Base Camp Trek. This trek commences from Kathmandu with a 35 minutes’ flight to the most unique airport of Lukla at the thrilling altitude of 9,334 ft / 2,840 m.

Transportation for the Everest Base Camp Trek

The trek starts and ends at the same place, Lukla. To reach there, you will need to take a 30-35 minute flight from Kathmandu.

Permits and paperwork for the Everest Base Camp Trek

You will need a TIMS and a Sagarmatha National Park permit. The trekking agency that is providing the service to you will do all the permits and paper works.

The TIMS permit for Everest Base Camp Trek costs 10 USD per person and the Sagarmatha National Park entry permit costs 35 USD per person.

Food and Accommodation on the Everest Base Camp Trek 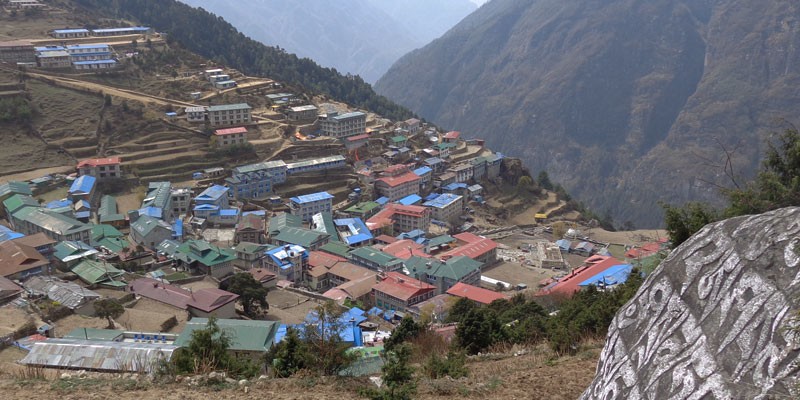 The Everest Base Camp Trek is probably the most well-equipped and facilitated trekking region in Nepal. The food and lodging facilities are quite impressive despite being far and disconnected from the cities. You can get varieties of foods and beverages menu to choose from. You can get rooms with attached western-style bathrooms in most of the places. You can even find a bakery in the Everest Base Camp.

Still, we recommend a group size maximum of 10 people for a better experience.

Drinking-Water on the Everest Base Camp Trek

Tap water and other natural sources are available along the routes which are drinkable using a water purifier, filter, or pills. Mineral water is available in plastic bottles and can be bought in hotels, teahouses, and lodges. However, we encourage you to buy less plastic bottled mineral water and use more of the natural and tap sourced water for environmental concerns.

Electricity, Telephone, and Internet on the Everest Base Camp Trek

Electricity is available in most places. Solar is available where there is no electricity line. Most of the hotel and lodges charges a certain amount for charging your phone or camera.

The phone network works in most places. We recommend you buy an NTC sim card as it has better coverage in higher areas.

Wi-Fi service is available throughout the entire region. You will need to pay a certain amount to use it.

The Everest Base Camp Trek is a difficult trek. You will have to walk to places that are above 5000 meters. There is a possibility of getting high altitude sickness in altitudes like this. If you have already done treks like Manaslu Circuit, Annapurna Circuit, or any other high altitude treks, then it will not be a problem.

For people with no previous experience of trekking, taking cardio exercises like cycling, running, swimming, hiking, etc. for at least a month prior to trekking in Nepal is highly recommended.

While on the trek, you will do the acclimatization process where you will learn to acclimatize with the increasing altitudes day by day.

Best time to do the Everest Base Camp Trek

The ideal time to do the trek in this region is in the autumn (September-November) and spring (March-May) season. The weather is moderate during these times. The number of trekkers is also high in this period of time.

In the autumn, the skies are clear providing crystal clear mountain sceneries. Festivals like Dashain and Tihar are celebrated in these periods of time adding extra uniqueness to the trek.

In the springtime, trails are decorated with colorful Rhododendron forests. The number of trekkers is a little less compared to the autumn season. The Nepalese New Year falls at this time. The skies are not as clear as during autumn and rainfall can be expected sometimes.

If you would like to avoid the crowd, you can trek in the monsoon and winter season. In the monsoon, trails look beautiful with lush green forests. But the roads and trails are slippery with leeches in the lower regions. Mountains are not as visible as in autumn and winter.

Trekking in the winter provides beautiful mountain sceneries. However, the heavy amount of snowfall can make it impossible to trek in higher places and passes. You may need to return back from halfway or cancel the trek for safety concerns. And lodges and teahouses are closed down due to extreme cold.

If you have plenty of time and would love to make the trek more interesting and adventurous, you can try out these different variations of the Everest Base Camp Trek.

Have any more questions about the Everest Base Camp Trek? Please let us know. We will be very happy to answer all of your questions.