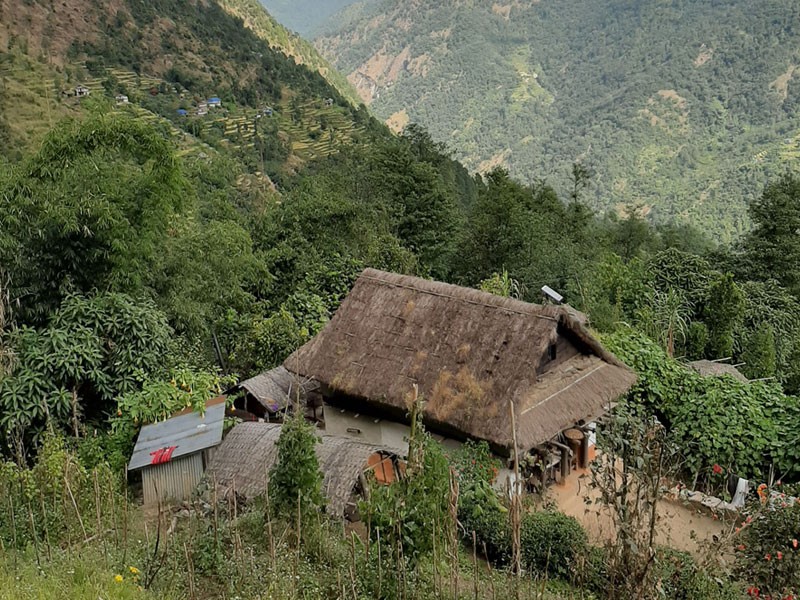 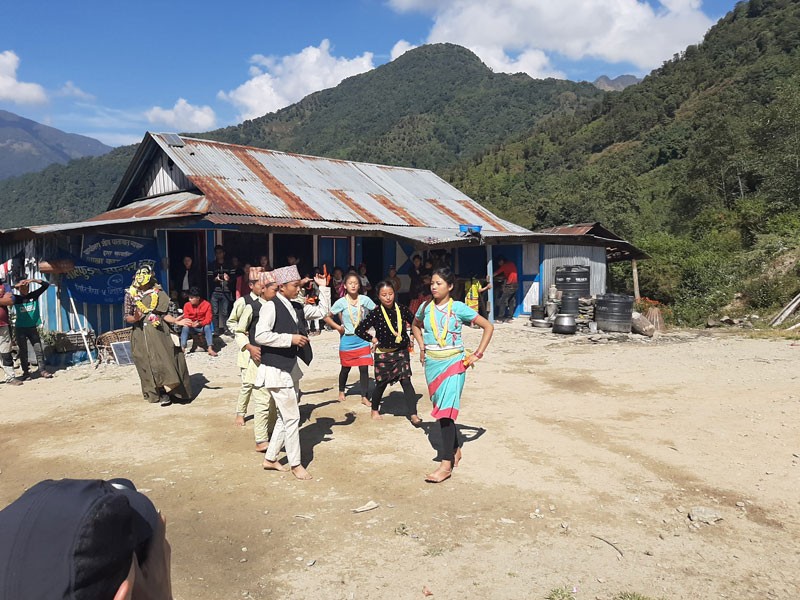 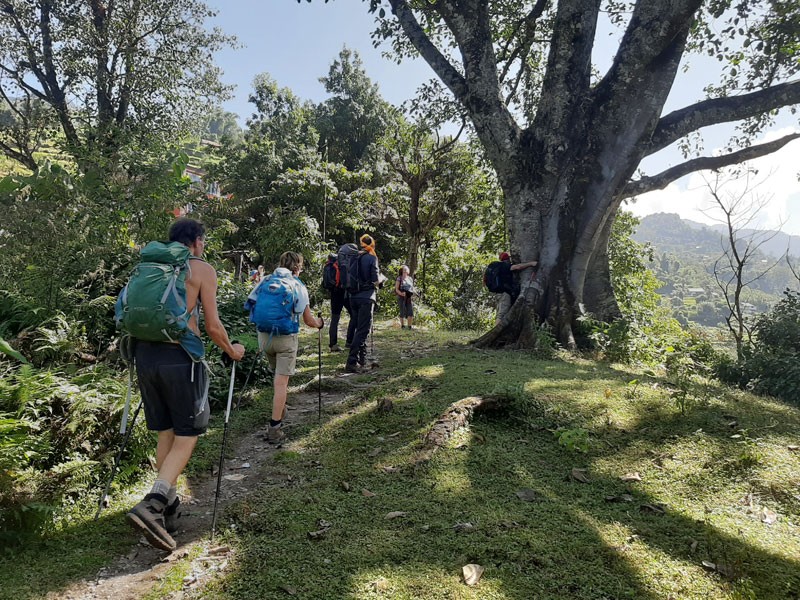 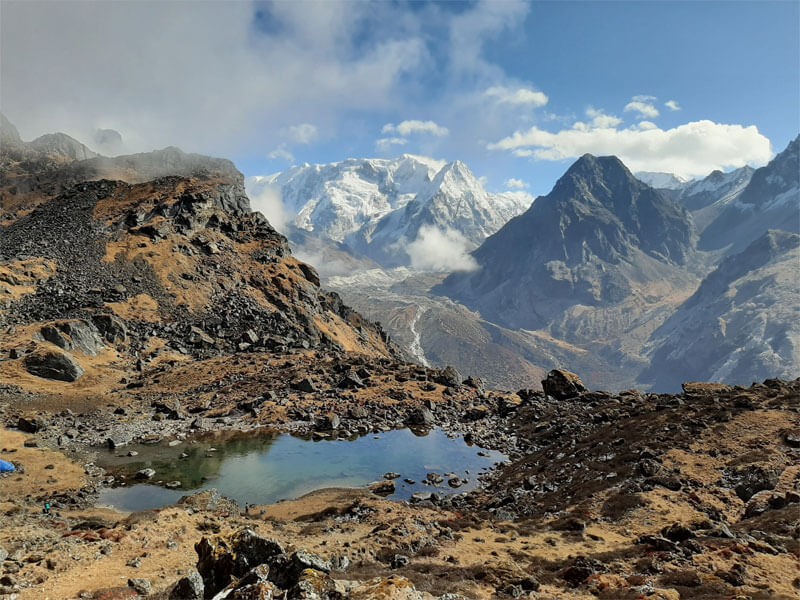 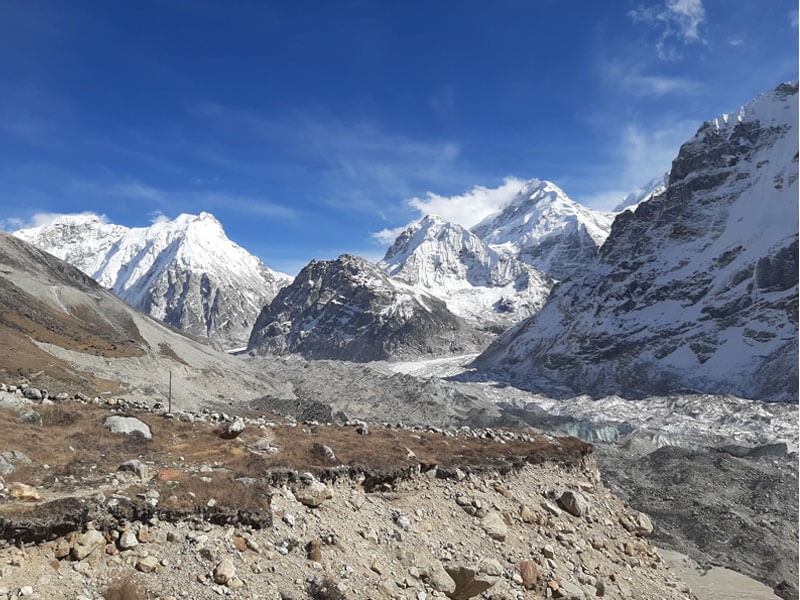 About Kanchenjunga Base Camp Trek

Kanchenjunga Base Camp Trek is one of the most adventurous trekking trails in the isolated region of eastern Nepal. The trek is named after the world's third-highest peak, Kanchenjunga (8586 M), which is located in the Taplejung district. This region is also renowned for its three picturesque valleys- the Simbua Khola Valley, the Ghunsa Valley, and the Tamor Valley. The fascinating fact about this region is that in 1997, the Government of Nepal in support of WWF  declared the main area of the Kanchenjunga region a " Gift to the Earth". You will get to see marvelous views of Mt. Kanchenjunga (8586 M), beautiful rivers, diverse landscapes, glaciers, and dense forests of rhododendrons.

Spread in an area of 2035 sq. km., Kanchenjunga Conservation Area is another attraction of this trek where you'll find rare and unique flora and fauna such as Rhododendrons, Orchids, Asiatic Black Bear, Red Panda, Musk Deer, Blue Sheep, Snow Leopard, etc. Kanchenjunga area is additionally a global center for plant diverseness and as many as 23 species of rhododendrons and over 2000 flowering plants are known here.

The 24-day Kanchenjunga Base Camp Trek allows you to discover the unique culture and lifestyle of the indigenous people who live in peaceful villages that stretch to the far side of the border between Tibet and Sikkim. The region is abundant in ethnic diversity and culture with over 11 ethnic communities including Sherpa, Rai, Limbus, Chhetri, and Brahmins. This region conjointly includes many monasteries, temples, prayer walls, and chortens, making the region rich in cultural heritage. The path gradually ascends from 1,200 meters to 5,180 meters higher than the sea level. You'll also cross over many passes, including Mirgin La pass and two base camp; North and South, which offers majestic Kanchenjunga massif views (8586 M).

The Kanchenjunga Base Camp Trek is a difficult one like most of the high-altitude treks in Nepal. However, the sheer beauty one can explore and experience during the trek is immeasurable. The best time to do the trek is during the Autumn and Spring season.

Open All Days Close All Days

One of the members of our company will welcome you at the international airport terminal gate and take you to the hotel. You will have a few hours to rest. Later, in the evening, you will meet with the tour guide in your hotel lobby. He will brief you on day 2 tour program.

We will go on a guided sightseeing tour to several UNESCO World Heritage We will visit one of the holiest temples of Hindus, the Pashupatinath temple. Nearby this temple is located the largest in Nepal, Boudhanath stupa. After visiting these places, we will head to Swayambhunath and Kathmandu Durbar Square. In the evening, you can explore the vibrant streets of Thamel by yourself and prepare for the trek. Your trek guide will also meet you in the evening time and brief you a little about the trek.

Day 03: Fly to Bhadrapur and drive to Phidim

After taking breakfast, you will drive to the airport and take a 50 minutes flight with your guide to Bhadrapur, situated in the lowlands of Terai. During the flight, you can observe the spectacular eye-catching panoramic views of the Kanchenjunga region. And from there you will drive to Phidim in a jeep where you can see one of the most famous and beautiful tea gardens in Nepal.

Early in the morning, you will drive to Taplejung in a jeep and have lunch at Taplejung. From there you will continue to Chiruwa which is 2 hours off-road drive from Taplejung. You will pass through the many beautiful ethnic community villages. The rest of the Nepalese staff will be waiting for you there.

From here, the actual trek starts. Today the trail will be mostly off-road until Tapethok because of the road construction work which is still going on. From Thapethok, you will continue walking on a trekking trail for around 1 hour and around 30 minutes on offroad until Simbu Khola. And after crossing several suspension bridges and walking through the beautiful cardamom and rice field you will arrive at Sekathum from where you can observe the view of Jannu (7711 M)

After taking breakfast in the morning, you will start the trek to Amjilasa. The trail is a bit rocky and passes along Ghunsa Khola crossing several suspension bridges. After crossing the last suspension bridge above Ghunsa Khola you will climb a steep uphill terrain for about 1 hour before reaching Amjilosa. It’s a small settlement with 2 small lodges situated on a steep hill.

Today you will be trekking mostly through the forest of rhododendrons, brown oaks, and thick bamboos, pasture, and waterfalls till you reach Ghyabla. And after having lunch at a small teashop near Ghyabla at the riverside you will climb a terraced hill for approximately 1 hour. After the climb, you will arrive at a small Sherpa village called Ghyabla.

Today the trekking will be a little bit short and easy compared to the other days. The trail comprises both the ascent and descent. The trail towards Ghunsa passes through a broad meadow pasture land and the dense pine and rhododendron forest. You will stop at a small traditional village called Phale to take lunch where you can visit an old monastery also. From here you will walk for around 1:30 hour before reaching Ghunsa which is the last and the biggest village in the Kanchenjunga region.

For acclimatization, you will take a short hike to the near places. After returning from the hike, you can spend the rest of the day exploring the ancient village of Ghunsa visiting monasteries, and learning about their Buddhist culture and tradition.

Today, you will be walking through the pine and larch forest uphill to the south bank of Ghunsa Khola passing several Mani walls and Chortens along the way. And then trail passes through the big and long landslide area. And after crossing a bridge, you will reach Khambachen. On the way, magnificent views of peaks like White wave peak (6950 M), Kumbhakarna (7711 M), Mera peak (6334 M), Sharphu massive, and many others can be seen.

Following the trail on the North West side of Kanchenjunga Glacier, you will hike along a high plateau by stepping up gradually through the rocky trail to reach Lhonak. You will have to cross a landslide area near a waterfall as well. From Lhonak, you can see the panoramic views of massive mountain peaks like Wegde Peak (6802 M), Mera Peak (6334 M), Nepal Peak (7177 M), Twins (7350 M), and many others.

Today you will hike up to Pangpema Base Camp but will have to take our breakfast early in the morning because some parts of the routes have been damaged by an avalanche recently. So, the hike will take 2 hours more than it used to take before. Due to the slippery trail, rocky way, landslide, and moraine glacier, you will need to be very careful while walking. On the way, Blue Sheep are often encountered. You will take lunch at Pangpema Base Camp. The stunning 360-degree view of the world’s third-highest peak, Mt.Kanchenjunga (8586 M) with other surrounding peaks can be seen from here. After exploring around for some time, you will return back to Lhonak.

You will return the same way down to Ghunsa via Khambachen and have lunch at Khambachen.

You will cross micro-hydropower and a rivulet before entering the forest. Then you will gradually ascend a steep trail that passes through the alluring forests filled with birch, pine, and colorful rhododendrons until a small pass which will take around 2 to 2:30 hours. From this pass, beautiful views of surrounding peaks and Ghunsa Valley can be seen. From here, the trail is mostly straight and easy till Selele.

Today will be one of the most challenging days of our trek, as we are crossing 3 passes above 4000 M (Mirgin La, Sinelapcha Pass, and another pass between Mirgin La and Sinelapche Pass). The trail is mostly a steep uphill climb till Mirgin La (4645 M). From here the trail is quite rocky mixed with both ascent and descent till Sinelapche Pass. After reaching Sinelapche Pass, you will descend down to Tseram through small pine and juniper forest which takes around 1-2 hours. The views of the surrounding peaks from all these passes are wonderful.

After our breakfast early in the morning, we will start our hike to the Oktang viewpoint. We gradually ascend through the juniper forest and cross the small stream by the wooden bridge. From here, the trail is mostly straight where we can see many Yaks and pastureland. After walking for 4-5 hours you will reach Oktang viewpoint via Ramche. From here, you can enjoy the stunning views of different nearby peaks including the 3rd highest peak in the world Mt.Kanchenjunga (8586 M). After spending some time here, you will descend down the same way. You will take our lunch at Ramche.

Today you will walk for around 3-4 hours. You will descend down through the rhododendrons and pine forests and pass through Anda Phedi before arriving at Tortong.

After breakfast, you will head towards Yamphudim via Lamite Bhanjyang where you will have lunch. Then, the trail descends down to a river through thick Rhododendron and Bamboo forest. Then after crossing a wooden bridge and walking for about an hour, you will reach Yamphudim. It is a small beautiful village inhabited by Sherpa, Gurung, and Rai.

Leaving Yamphudim behind, you will check out our Kanchenjunga Conservation Area permits and restricted permits. You will cross several suspension bridges and small villages before reaching Khebang.

Today is your last day of trekking. After breakfast, you will hike through the beautiful villages of Limbu and Brahmin through the farmland and pastures.

Today you will drive off-road till Tharpu in a jeep and then to Ilam. In Ilam, you can see one of the famous tea gardens in Nepal and the beautiful Himalayas as well.

After taking breakfast with the beautiful sunrise view, you will drive to the lowlands of Bhadrapur from where you will catch our flight to Kathmandu. Later in the evening, our company will organize a farewell dinner in a traditional restaurant for you for completing this wonderful trek.

Day 23: Extra day security in case of flight cancellation due to bad weather

In the case of flight cancelation or delay due to various unexpected circumstances like bad weather, political strike, or natural calamities, we always keep one extra day as a security/reserve day.

After having breakfast, one of the members of the company will escort you to the airport for your flight back to your home.

If the departure dates do not match your time frame, leave us a message. And we will customize the trip according to your desire and availability of time.