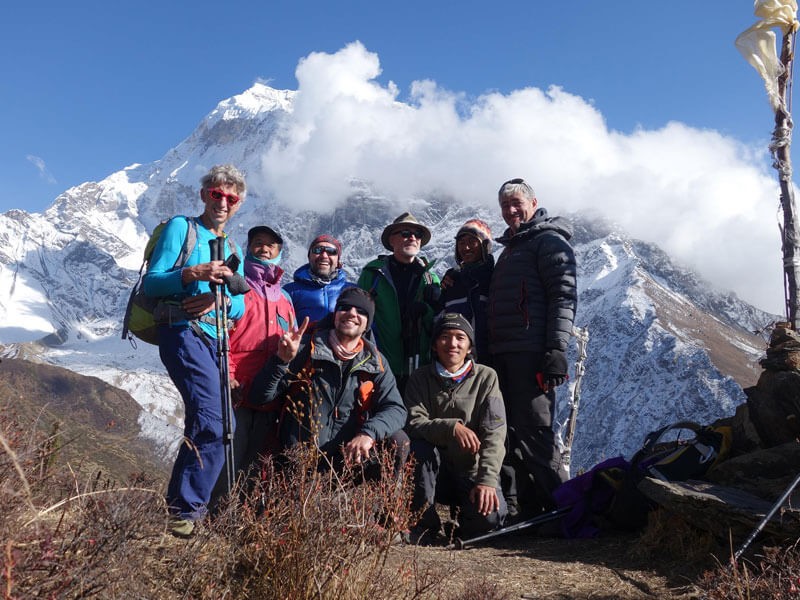 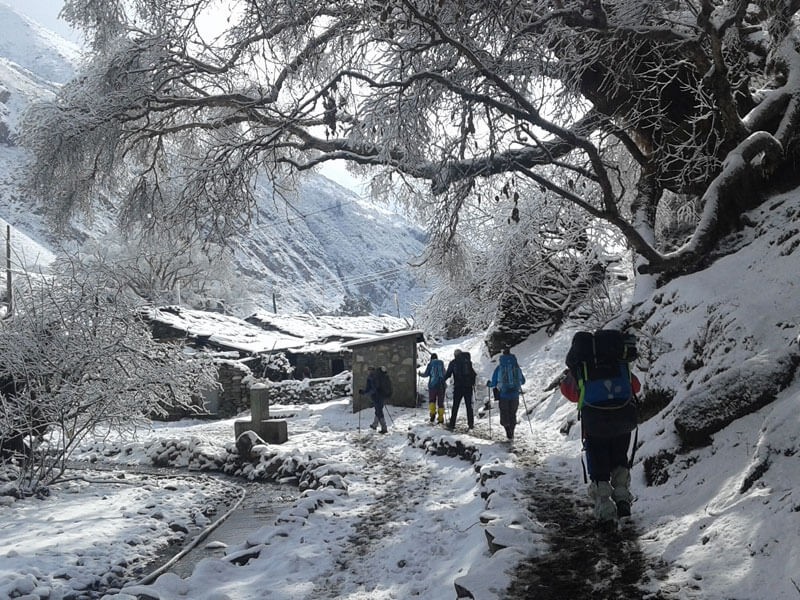 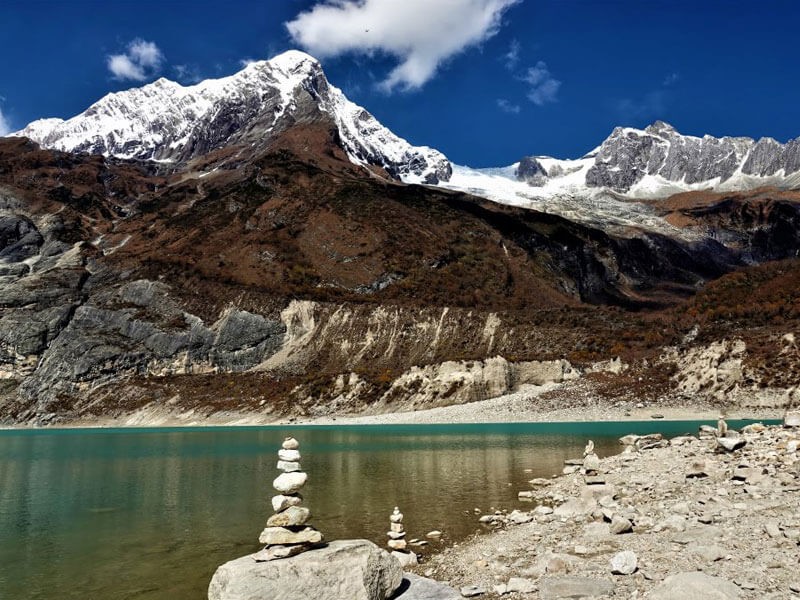 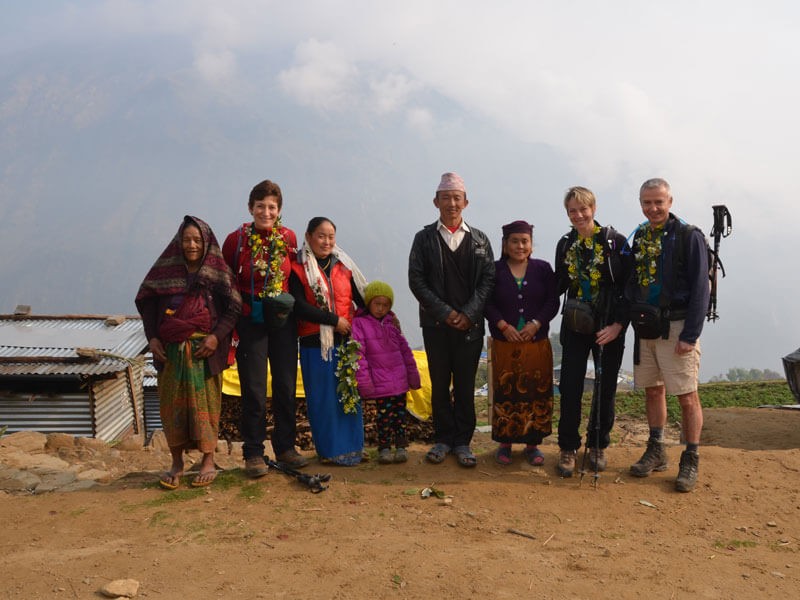 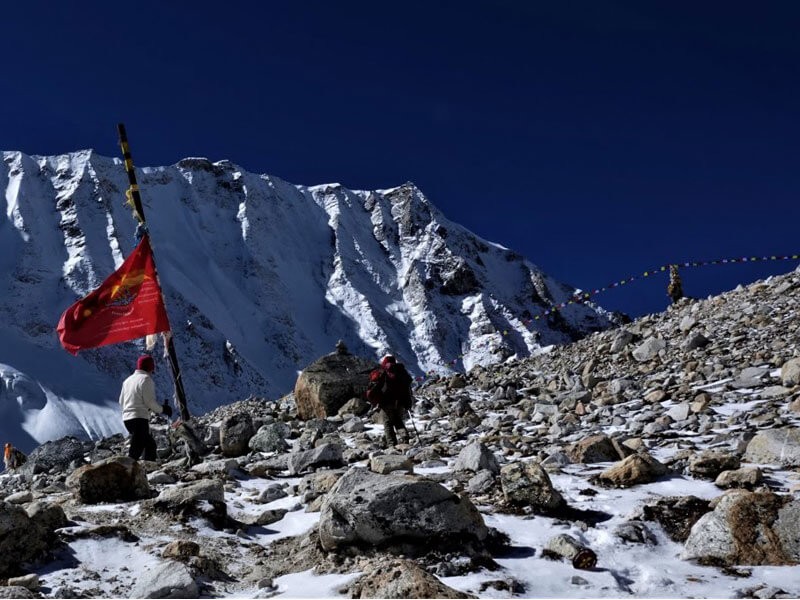 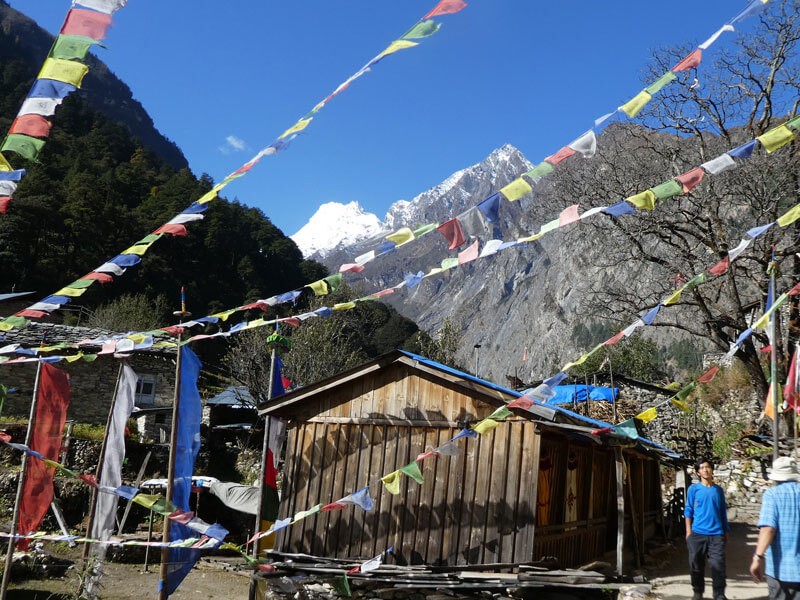 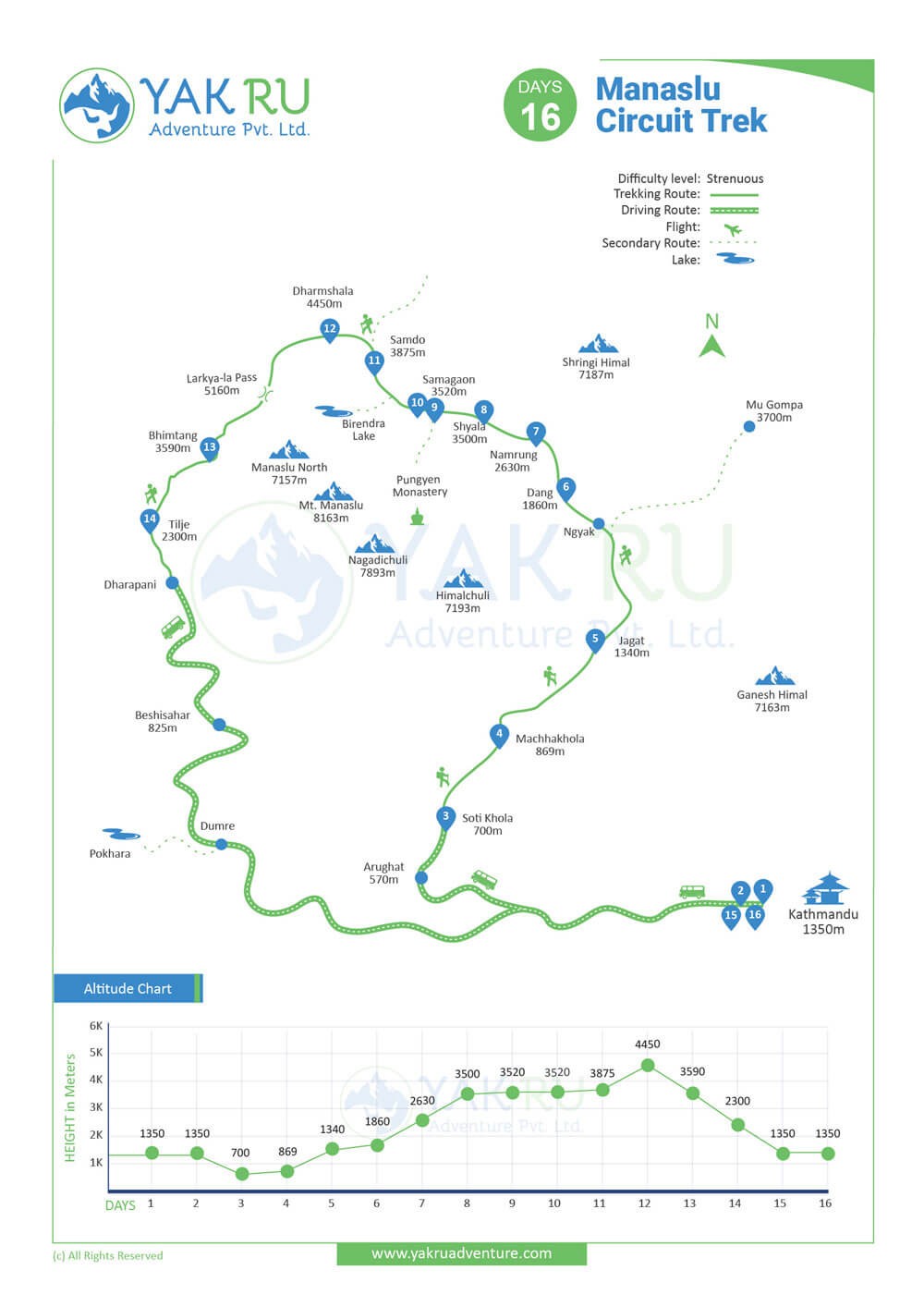 The Manaslu Circuit Trek is an incredible 16 days of authentic nature and cultural experience while encircling the world's 8th highest mountain, Manaslu (8163 M). The government of Nepal opened up this region to foreigners in 1991. Lately, this trek is getting popular as an alternative to the more busy Annapurna region. The majority of the trek lies within the Manaslu Conservation Area, which comprises sub-tropical Himalayan foothills to arid Trans-Himalayan high pastures bordering Tibet.

The Manaslu Circuit Trek begins from the tropical lowlands to the high alpine regions exceeding 5000 meters in altitude. The initial 4 to 5 days of the trek follow the trail along the Budhigandaki River, an ancient salt trading route. Then after about a week of trekking, it concludes in the Annapurna region via the traverse of Larke La Pass (5160 M). The trek passes through numerous beautiful villages of diverse ethnic communities, terraced fields, pleasantly mixed forests, lakes, and plenty of thrilling suspension bridges. One prime example of the thrilling suspension bridge is the cantilever bridge in Yaaru Bagar that connects the other seven northern villages of the Manaslu region. The fascinating sceneries of various mountains such as the Manaslu, Annapurna 2, Himlung, Kangguru, Cheo Himal, Lamjung Himal, Ganesh Himal, Boudha Himal, Shringi Himal, and many more during the trek please anyone who comes across it. Diverse wildlife is one of the chief features of this trek. Himalayan Tahr, Gray Langur, and Blue sheep are common sightings along the trail.

The people around here practice Bon (Pre-Buddhist religion) and Tibetan Buddhism. The lower region is inhabited by the Gurungs who are followers of the Bon, whereas the upper region people are closely tied to Tibetan culture and practice Tibetan Buddhism. Stupas, monasteries, mani walls, prayer flags, and chortens can be seen a lot in this region. On the trek, one can experience the well-preserved culture of these peoples.

Our 16-day Manaslu Circuit Trek Itinerary starts from Sotikhola and ends at Dharapani. If you would like to customize the itinerary according to your desire, physical fitness level, and time frame, please feel free to contact us. Our experts will help you craft a perfect itinerary that ensures a top-notch experience with safety.

Open All Days Close All Days

One of the members of our company will welcome you at the international airport terminal gate and take you to the hotel. You will have a few hours to rest. Later, in the evening, you will meet with the tour guide in your hotel lobby. He will brief you on the day 2 program.

After having breakfast, we will begin sightseeing in Kathmandu. we will visit places like Pashupatinath Temple, Boudhnath Stupa, Kathmandu, Durbar Square, Swayambhunath, and Patan Durbar Square. All of these places are part of world heritage sites. In the evening, you along with your trek guide will prepare for the trip and arrange all the gear.

After a quick breakfast, you will begin our drive toward Machhakhola. The route passes by Arughat and Sotikhola. You will drive on the blacktopped road until a little ahead of Arughat and from there you will go on a dirt road till Machhakhola.

After crossing the bridge over Machha Khola, you will have to walk on a rugged vehicle road until Tatopani. Here, you can take a short break and spend some time enjoying the natural hot spring. The trail then ascends and crosses Budhi Gandaki reaching Dobhan. From there, you gradually ascend through the landslide area to reach Thulo Dhungga, Yaruphant, then cross a suspension bridge and reach Jagat.

Leaving Jagat behind, you will ascend towards Salleri and then reach Sirdibas walking on a rugged vehicle road. From here, you will pass by Ghatte Khola and cross a long suspension bridge. The trail then moves upwards to Philim and takes us to Ekle Bhatti. Further, you will reach Nyak Phedi and pass by pine, and bamboo forests. And after crossing several bridges, you'll reach Dang.

The initial part of the trail will be narrow, on relatively flat terrain, and on a landslide area as well before reaching Ghap by crossing a couple of bridges. After leaving Ghap, you will again cross several bridges over Budi Gandaki River and walk along with the beautifully cultivated fields. After crossing the last bridge, you will ascend through the beautiful low alpine forest all the way to Namrung. Namrung is a beautiful highland hamlet inhabited by people resembling closely to Tibetans.

Trekking through Bhanzam, you will pass through many beautiful ethnic villages like Lihi, Sho, and Lho. You will visit Ribung Gompa in Lho village situated on the top of a hill with a magnificent view of Manaslu. From there, you will continue trekking through the pine & rhododendron forest to reach Shyala.

Today you will climb to discover Punggyen Gompa before trekking to Samagaun with packed lunch. You will trek through pastures and cross a river draining from the Pung Gyen glacier. From Pungyen Gompa, you can see a really impressive panoramic view of many surrounding peaks along with the eastern face of Manaslu. Then you will descend down the same way and join the main trail to Samagaun, the last largest village in the Manaslu region.

Today is a day of rest day. You will take a short excursion to Birendra Lake for acclimatization. While hiking, you might also come across wildlife like Himalayan Thar.

Passing by forests of birch and juniper, you will further trek through small villages. You will then cross the wooden bridge over the Buddhi Gandaki River and reach Samdo village, which is a small Tibetan refugee village.

You will cross a suspension bridge and continue to ascend gradually through the high pasturelands where you will encounter many yaks grazing with a beautiful view of Manaslu North, Larkya Peak, and Larkya glacier on the left side of the trail. And by crossing several rivulets and continuing the ascent you will arrive at Dharmasala.
Elevation: + 595m / -65m

You will start early in the morning after breakfast. With a short climb, you will reach the north side of Larkya glacier. The trail then ascends through the steep path and takes you to the top of the Larke La Pass from where you will enjoy stunning views of Himlung Himal, Cheo Himal, Kangguru and the huge Annapurna II, and many other mountains. Then you will descend down to Bimtang where you will be automatically in the Annapurna region of the Manang district. It's a long and challenging day compared to the other days.

After having breakfast, you will pass the Kechakyu Khola Glacier and trek through the lush forest of rhododendron. On the way, you will get to see beautiful views of Mt. Manaslu. Further, you will reach Gho village and head towards Tilije. Tilje is a nice and old typical village inhabited by Gurung. You can find facilities for a hot shower, wifi, and electricity from here onwards.

Leaving Tilije behind, you will descend to Dharapani and have your permits checked. You will be leaving the Manaslu Conservation Area and entering the Annapurna Circuit Trail. Then, you'll take the old trail at the left to Tal village where you will have our lunch. Tal is a border of Manang and Lamjung district. From there, you will continue all the down and cross a suspension bridge to reach Chamje.

From here, you will drive to Kathmandu via Besishahar. Upon reaching Kathmandu, you will move to your hotel. In the evening, you will have a farewell dinner organized by the company.

After having breakfast, one of the members of the company will escort you to the airport for your flight back to your home.

If the departure dates do not match your time frame, leave us a message. And we will customize the trip according to your desire and availability of time.

The construction work for the vehicle road is still going on and recently it has reached the hill across Philim. We have an alternative but will need to walk on those roads on a number of occasions.

And at Dharmasala we will have to share a single room with 4-5 people as the accommodation services are basic and limited.

Sujan is a very professional trekking guide on whom you can rely for more than 100%! He has very good experience in Culture and Nature and we might have missed a lot along the way without his fabulous view, animals,plants, cultral sites. In every situation he takes best care for his clients in his natural and kind way. As this was only one of several treks with Sujan I can recommend him as a very good and responsible guide with experience in each region he treks! Be sure you will have an unforgetable time and a lot of fun with him!

beautiful trek in the middle of the rice fields, leaving unveiled the mountains. Sujan and his team guided us from villages to villages, meeting the locals . Visit schools, rebuild homes, stigmata of the 2015 earthquake, a lot of emotions in these villages without escape in case of disaster